This week's ETF spotlight focuses on the Global X FTSE Nordic 30 ETF (GXF).  Scandinavia is one of the world's most energy secure regions, with large Norwegian oil reserves, wide renewable energy adoption, and broad social and government efforts to reduce energy consumption.  The Nordic countries are are also some of the world's most economically and politically stable economies and stand to benefit greatly from peak oil. 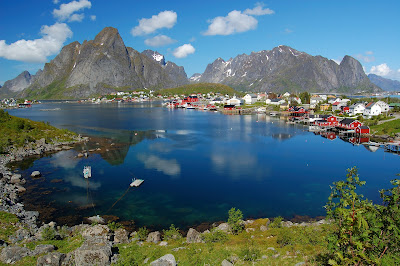 The village of Reine in Lofoten, Norway
(Credit: Petr Šmerkl)
Norway is the world's 5th largest oil exporter and 3rd largest gas exporter - ahead of Kuwait and behind Iran, the UAE, Russia and Saudi Arabia.  Western Europe gets much of their oil from Norway's offshore fields in the North Sea and this resource has provided an incredible source of wealth for Norway - accounting for approximately 50% of all exports.

Starting in 1996, the Norwegian government started funneling the excess proceeds from its oil exports into The Government Pension Fund of Norway.  In 2010, the fund topped half a trillion dollars, and currently holds 1 percent of the global equity markets.  The incredible size of Norway's sovereign wealth fund has greatly increased the country's resilience to the possible harmful effects of peak oil.

Norway's North Sea oil production peaked in 2001 at 3.4 million b/d and has been declining at a rapid 13% rate since.  The decline rate is a cautionary tale for anyone who thinks that enhanced oil recovery technology will save the world from peak oil; Norway is a world leader in such technology and rather than postponing the country's production peak, it has merely allowed it to continue to produce oil for a longer period time at production rates that are still declining from their peak.

While Norway's oil production peak might, on the surface, make it in an unattractive peak-oil investment play, there are a number of reasons why Norway could benefit greatly from peak oil - including the country's large existing oil reserves, energy independence, potential arctic oil reserves, position as an oil technology leader, societal push for energy efficiency, large existing renewable energy infrastructure and political and economic stability relative to other oil exporters.

Despite Norway's oil field depletion rate, the large size of the existing oil reserves and the government and societal push for energy efficiency make it unlikely that the country will become a net oil importer in the near future.  This leaves it in the enviable position of being one of the few energy independent nations on earth.  This should allow Norway to not only ride out any oil shocks, but also to profit from them.  Additionally there's some research which shows that energy independence allows economies to continue to grow during worldwide recessions.

Norway is also actively pursuing the exploitation of new sources of oil in the Arctic Ocean.  Oil companies are extremely optimistic about the potential for vast quantities of oil in the Arctic, with some experts saying that reserves could total 25-50% of the world's undiscovered oil.  Norway, along with the United States, Russia, Denmark and Canada, stand to benefit greatly from this "final frontier" of oil exploration.

Norway is a worldwide leader in offshore oil rig technology, due largely to the fact that the North Sea is one of the harshest drilling environments on earth.  Winter temperatures are frequently below freezing and waves can regularly exceed heights of 10 meters - with one instance of a 25 meter wave hitting an oil platform in 1995.  In overcoming these unprecedented technological hurdles, Norway has developed some of the world's most advanced offshore oil drilling technology, and stands to benefit from exporting it to companies which wish to drill in even harsher environments, such as in the Arctic.

Additionally, Norway is a technology leader in advanced oil recovery from carbon sequestration.  Statoil currently operates the world's largest carbon sequestration facility and should be able to easily export its technology and expertise to other oil companies wishing to increase oil production and reduce carbon emissions - both major economic issues for oil companies in the future.  Additionally, this carbon sequestration technology could potentially be combined with underground coal gasification technology to carbon-neutrally harness the 3 trillion tons of coal which lie off Norway's coastline (a reserve 3 times larger than the entire world's onshore coal reserves).

Norway has also long been a leader in offshore oil rig safety standards, with its Det Norske Veritas classification being one of the world's toughest regulation standards for offshore vessels.  As a result, Norway stands to benefit from the current push to retrofit existing offshore oil rigs to higher safety standards, due to new government regulations resulting from the Deepwater Horizon oil spill in the Gulf of Mexico.

In addition to its renewable energy sources, Scandinavia is leading the world in an effort to reduce its oil consumption.  Major Scandinavian cities like Stockholm, Copenhagen and Oslo are extremely walkable, have readily available public transportation and lead the western world in bicycle use.  In Copenhagen, 36% of all citizens commute by bicycle and the city has set a target for 50% of citizens to do so by 2015.  In Sweden, 43% of the country's electricity comes from renewable sources and the government has drawn up plans to make the country oil-free by 2020.

The Scandinavian countries have robust economies with stable currencies.  The Norwegian Krone has even been called "the world's safest currency" - a distinction which is particularly salient during the current currency wars, with the world's largest economies in a race to the bottom to devalue their currencies.  The Scandinavian countries are some of the wealthiest on earth; all rank in the top 20 for gross domestic product at purchasing power parity per capita, with Norway holding the 3rd spot, behind only Qatar and Luxembourg.  They are also some of the most productive, with GDP-PPP per hour worked ranking Norway as the most productive country on earth.  Sweden, Finland and Denmark also all rank within the top ten of the world's most competitive economies.

On its own fundamental merits for currency stability, government stability, economic stability and potential for economic growth, the Scandinavian countries make an ideal investment target.  When combined with their focus on energy independence and the vast resource wealth of Norway, investing in the Global X FTSE Nordic 30 ETF (GXF) is a great way to protect your portfolio from peak oil.