I decided to start this blog to help people adjust their portfolio and their financial lives to make them more resilient to the potential effects of global peak oil.

For the purposes herein, I'll define peak oil as the point at which global conventional oil reaches a daily production peak (in millions of barrels per day) and begins to decline thereafter.  An easier way to think about this definition is - the point at which all of the "easy oil" is in a state of terminal decline.

I'm not here to convince you that peak oil will eventually happen - dozens of people have written books and reports detailing the geological reasons for global peak oil, with empirical regional depletion data extrapolated up to the global level. Nor am I here to try to convince you that the global peak is imminent or has already happened - nobody knows the exact timing of peak oil, and it could be a number of years before it arrives.

Rather, the purpose of this blog is to help you bolster your portfolio, following the precautionary principle - you're better off being safe than sorry, and frankly it'd be financially reckless to not diversify your portfolio holdings against a financial threat with such far-reaching implications.

I believe an "ideal portfolio" would be invested in the following areas:
ETFs are the ideal way to diversify a portfolio - they provide the ability to own diversified stocks and commodities at a very low cost and they are extremely liquid. It makes much more sense for an individual investor to buy an ETF than to buy a number of individual company stocks. With ETFs, you can easily reduce your risk to poor performance in individual companies; your risk is far lower if you own a broad energy ETF (like VDE) than if you own individual company stocks - just imagine if you had owned BP or Enron as your sole "energy play".

Countries with good energy security are those which are currently net oil exporters and those which have the potential to increase their oil production. Canada, Russia and Brazil all fit into this category. Norway is a net exporter, and although oil production from the North Sea peaked in 1999, I think Norway and the Scandinavian countries are well ahead of the rest of the world in terms of energy security due to their access to large existing reserves of oil, their access to potential new sources of Arctic oil, their successful efforts to reduce energy consumption, and their heavy investment in alternative energy. 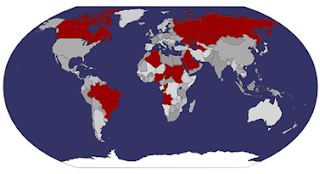 Canada and Norway both have large, stable, industrial economies. Australia is a major exporter of industrial commodities. Brazil and Russia make up the B and R of the BRIC countries, and have huge economic growth potential. The other two BRIC countries, India and China, are net importers of oil and both have terrible energy security.

The United States, while currently the 3rd largest producer of oil, is also the world's largest consumer of oil and a net importer. Oil production in the United States peaked in 1970 and the US has been jockeying for oil security ever since. Obviously the United States is a huge industrial economy, but I believe its economic growth potential could become limited by global peak oil, and therefore, there are better investments to be made in other countries.

Commodities will benefit in a number of ways from peak global oil. Firstly, commodities themselves are a store of value. Uncertainty over the future value of the US Dollar has been driving many investors into precious metals recently and in the event of a peak-oil-induced global economic collapse, commodities will hold their value much better than stocks or currency. Commodities also provide a hedge against inflation. Energy prices are one of the key factors in inflation - as prices of energy go up, so do prices for agricultural commodities, metals and all industrial inputs. During periods of high inflation, someone holding $100 in gold is going to be much better off from a purchasing-power standpoint, than someone holding $100 in US Dollars or $100 in US company stock.

Lastly, investing directly into energy is the best way to benefit from higher energy prices. There are two ways to invest in energy - by purchasing oil directly as a commodity (through futures contracts or via an oil-futures ETF) - or by purchasing stock in companies that produce oil or provide equipment and service to the oil producers. I believe the latter method is better for a number of reasons. Holding futures contracts is risky and buying ETFs which hold oil futures is costly, since most are rebalanced on a daily basis. Oil company ETFs, on the other hand, are far less risky, less costly and provide steady dividends. You can think of the choice as: "would you rather own a loaf of bread or own the bakery?"

Investing in alternative energy is also a good hedge against the political risk of owning oil companies. The political environment during an oil price spike (especially a sustained price spike) is extremely unpredictable. In an effort to punish a scapegoat, politicians could impose irrational (and economically damaging) windfall taxes on oil companies. Oil rationing and oil company nationalizations certainly aren't off the table either. The elimination of subsidies and tax-breaks for oil producers and the implementation of massive subsidies for alternatives energy could also certainly happen, and it would pay to own alternative energy stocks in such an environment. Additionally, as we start sliding down the far side of the peak oil curve, we will need to transition our world from a hydrocarbon-based society to a renewable-energy based society. Renewable energy companies stand to benefit handsomely from this transition.

So to put all of these recommendations together, I believe an ideal "peak oil proof portfolio" would look something like this: